I have wanted a trailer for a very long time. I can’t tell you how many times I’ve had to borrow a trailer for whatever reason. Worst case I’d find myself having to rent one instead. As much as I longed for one, though, the options didn’t look good. I really wanted at least a 5×10′ but there was no way that was going to fit into the garage and I only have 4′ gates so the backyard was out of the picture as well.

Recently (within the past year) I’d settled on the 4×8′ folding trailer from Harbor Freight. Sure, it wasn’t as wide as I wanted but it fit the bill in that it would fit in the garage while taking up minimal space. I’ve tried to be frugal though (more money for gear, of course) and even with a sale price of $296 it was more than I wanted to spend. As luck would have it, though, I got a flyer in the mail with a coupon and was able to pick it up for $249! Of course it cost me another $70 for license and registration. 🙁

It took me part of three days to assemble. On Tuesday I put the front half together. On Thursday I knocked out the rear half. Yesterday I packed the bearings and assembled the axle/wheel assembly and ran the wiring for the lights. Yesterday was by far the most time-consuming part of the project. Of course it didn’t help that the cheap brass zerk fitting on the left hub snapped off when I was removing the grease gun and I had to make another trip to the store for a replacement. Oh well, it all worked out.

Today I worked on kayak mounts. I realized I cut my padding a little short so I’ll have to re-pad it so I can carry two boats. I’m pretty happy with how it came out, though. It rides very well. Bumps do jostle it a bit but it’s a very light trailer (250 pounds) and even with the Slayer tied down it’s barely over 300. I was hoping I’d knock the stands out pretty quickly but the Chinese had other plans. It seems that the stake pockets are too narrow for a standard 2×4 so I had to break out the table saw to trim them up. I ran 3/8″ bolts through each upright to secure them but I’m thinking of changing them out for something faster. I’ll have to test the theory, though. I don’t want to give up too much stability in the name of speed. 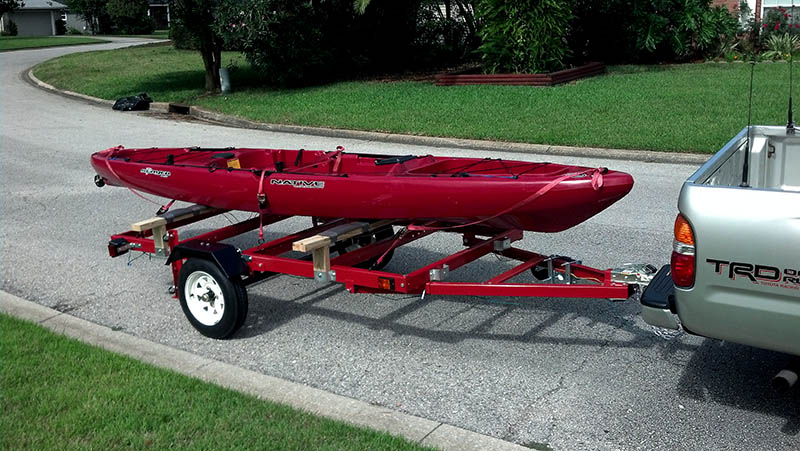 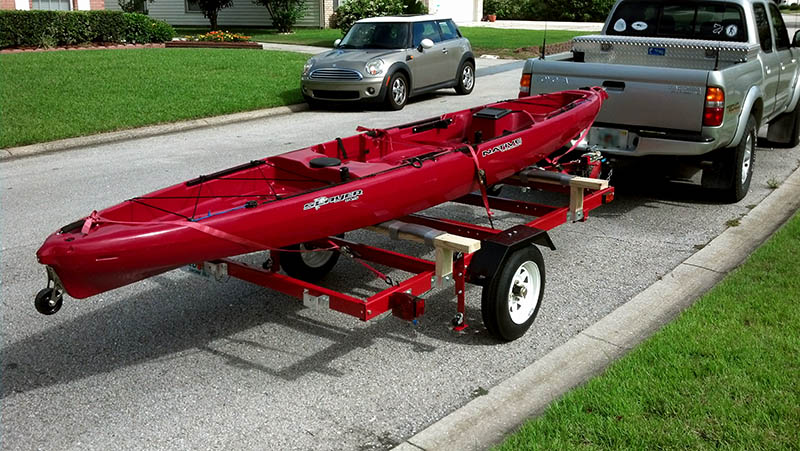 I made a quick trip to Northern Tool to pick up a trailer jack. One thing I hate doing is resting the coupler on the ground or having to lug around a block or something to set it on. For those rare times I have the trailer setup and not connected to the truck I can now keep it level.

While this will primarily be used for the yaks, I’m happy to have something to make big trips to Home Depot and Lowes less of a chore. I can use it to haul the big mower for doing trail work, and it’ll let me distribute the load when camping so I don’t completely block my vision to the rear when I’m loaded down like the Beverly Hillbillies. Of course this will all come later this week when I lay the decking and build some sides.

Most of all, I’m excited that I no longer have to struggle trying to lift this beast of a yak over my head and onto the roof of my truck!

This entry was posted in misc and tagged mobile, slayer, trailer. Bookmark the permalink.

9 Responses to Slayer On Wheels