Posted on January 1, 2012 by Redfish Whisperer

It hardly seems real that another year is upon us. I suppose if they Mayans were right we can save a lot of money this year since we won’t need to worry about Christmas gifts. I don’t think I’ll hold my breath, though. Rather than waxing poetic I’ll simply wish you a Happy New Year and move on. 🙂

I was good to myself for the new year. Ok, technically I suppose you could say that I ended 2011 on a high note. Hmm, which way to take this story?

I just realized I never posted the hateful day I had following Christmas. I went fishing and let’s just say that things didn’t go well. The wind was horrendous and it was a major battle to clear the channel and get into the semi-protected tidal creeks. The kayak fought me every inch of the way and by the time I hit the spot I was after I was soaked and worn out.

Along the way the rope to my stakeout pole got snagged in the carabiner that secures my insulated fishing bag to the bow. I also thought that perhaps I had too much ice since I seemed to be bow heavy. I dropped the door to the bag and started scooping ice out without realizing that my camera had dumped into the kayak and was soaking in water. Scratch one camera. I got the line free and continued on to the spot only to lose something else over the side. I’d forgotten my net so I couldn’t dredge the bottom and while the bottom felt solid I wasn’t going to risk it. I was by myself and it would be easy to drown if I’d gotten stuck and the tide came in. I finally threw in the towel and miraculously caught a single trout on the way back to the truck. Of course true to the day it was an inch shy of legal.

Jump forward a few days and it’s now the 30th. The year is almost over and I want fish! December has been incredibly warm and I want to take every opportunity. I had plans to borrow a friend’s kayak for a test drive with thoughts of upgrading mine. Unfortunately I had to call and cancel when a tooth popped out of my mouth while eating breakfast. So rather than spending my day fishing I was laying in a dentist’s chair.

I’m not one to be easily defeated and rallied to hit the water at 7am on the last day of the year. The weather was cool but I knew it’d warm up soon and quickly. We had a small group and hit the water on time and with another great sunrise. 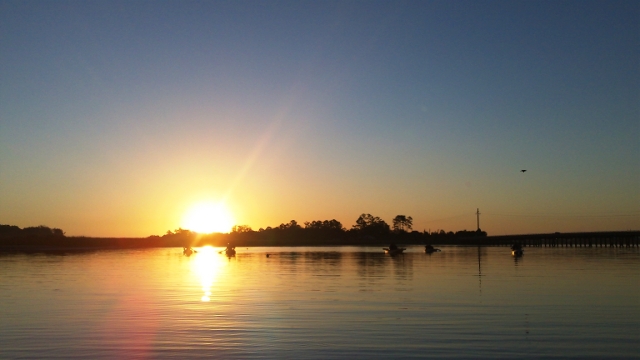 We fished all over. The water was calm and easy to cover but the fish were nowhere to be found. I’m sure it’s because we should’ve waited for the sun to warm the water up. Starting so early in the day meant that the water temp was still cold. Even at noon it was still considerably cold. If I were a fish I would’ve slept in too.

With a line of kayaks poised to strike along a group of oyster mounds I watched in thrilled disbelief as my line went down. Fish on! As it got closer in the murky water I saw that it was flat. Flounder!! 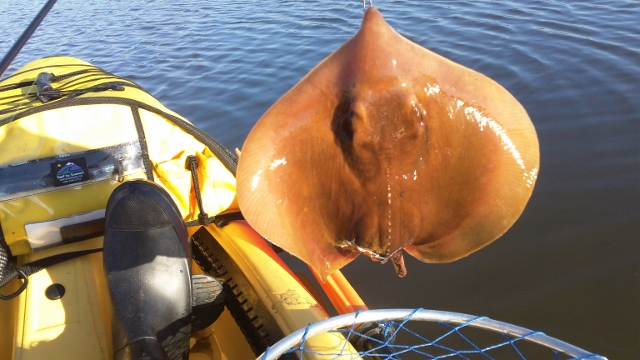 That’s a funny looking flounder, isn’t it? Alas, it’s the only thing I was to catch. I headed back to the spot which I now fully believe is cursed and after losing one rig and having to unsnag a couple of others I gave up and started the paddle back. By then the wind had picked up and it was a rough and bumpy ride. I felt good that I’d at least snare a trout or two in what I’ve dubbed Trout Alley but they must’ve been in bed as well.

And this is the crux of the story. Took a while didn’t it? Just admit it. It was worth the wait.

I really can’t help it that the fly shop is on the way home from the fishing spot…can I? No! Of course not! And I can’t help that I stopped either. Randy and I hopped in my truck and headed over to a little pond I never knew existed. It looked like it might be a really fun place to try some bass fishing when it warms up. Anyway, I loaded up both the TFO TiCr and BVK rods and threw both Cortland 440 and RIO Mainstream WF lines. The goal was to see how they compared with my Scott S4S. Amazingly they both worked 1000 times better than what I’d been trying to use! I went back and forth and I could scarcely tell the difference between the rods other than a noticeable weight difference with the BVK. Even Randy said I was throwing them both the same.

In the end I came home with the BVK. It’s a lighter rod which should certainly help on long fishing days. I think it’ll also be easier to use in the kayak. I also think I cast a little better with the BVK. Both are fine rods and if you’re in the market I don’t think you’d be disappointed in either. Now I just have to pull it out of the sock and catch some fish!

So whether you want to consider it the beginning of a new year or the ending of an old one, there’s a new rod in my quiver. I have high hopes and hope to post many successful fishing reports over the next twelve months.

This entry was posted in misc and tagged bvk, fly fishing, tfo. Bookmark the permalink.