Posted on October 4, 2015 by Redfish Whisperer

After striking out yesterday I was determined to do better today. As soon as church was out I hit the road and headed to the ramp. I’d already seen how high the water was and knew I needed to be there well before the peak if I wanted any shot at the action.

I made it to the ramp with about 2 hours to spare. Perfect! I hit the water and immediately went into patrol mode. I actually set a pattern in my mind and used it to cover the flat. Then I saw it. 12 o’clock and 30 feet. The bluish tail flopping back and forth as if the red were waving at me. Unlike yesterday, today I was fully prepped. I carefully transitioned from paddle to rod. A nice, easy back cast. There it goes. Plop! Damn. Too short. I carefully raise the rod loading it for a re-try. The line goes back. The expertly crafted fly is on a mission of greatness. It sails through the sky with the greatest of ease. The tail is still waving. It’s going, going, BONK! SPLASH! SWIRL! GONE! The fly lands with a smack on Mr. Redfish’s head. I utter a few choice words, transition back to the paddle, and the hunt is on again.

It’s a very overcast day. Much darker and considerably cooler than yesterday. The water is still incredibly clear so I welcome the clouds as camouflage. I figure my odds are greater if they can’t see a stark shadow looming overhead. 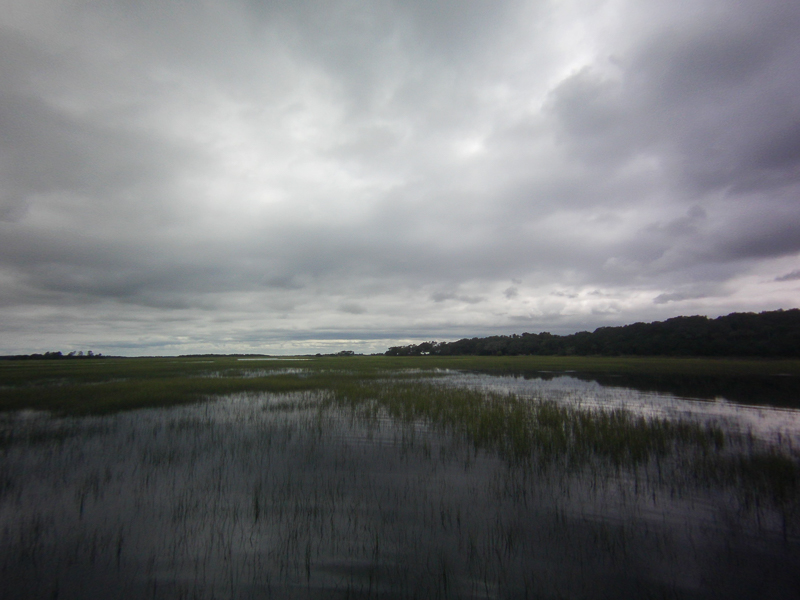 Up ahead I see another tail. I’ve impressed myself with my stealth. I can barely hear myself on the water. I am one with it. I pick up my rod to make the cast of a lifetime. *&^##@!)^)&*@$! The fly line is knot going to let it happen. While I curse the wretched mass in my hands the tail waves goodbye.

Wait! What’s that? Another tail. I’ve been cruising the flat and following my pattern. It’s really paying off. There’s a tail just ahead. I pick up my rod, make a cast. Too far to the right. I make another cast. *&^#^)@*&@^#)*@!^ I’m now wrapped around my spare rod. How the bloody hell did I do that? And the tail is gone.

Nearing the ramp I make the turn to head back over the flat. A flash of movement catches my eye. It had to be a tail but where is it now? I peer into the water. There! I’ve got a swimmer. I cast in front of him and he ignores it. As I’m preparing for another shot he turns around. I put it about 4 feet in front of him. Strip. Strip. BAM! He’s on! BOOM! He’s off! Another one bites the dust.

Licking my wounds, I push the yak forward. I make it a scant 40 feet and behold the largest tail I’ve seen all day. I grab my rod. )#(*^@#^)*$@!^@!*&^ My line must’ve snagged on the grass and got pulled into the water. I frantically try to get the leader in hand so I can make a quick cast. There it is! I have the fly! I stand tall ready to cast and…the tail is one. Large ripples signal its rapid departure.

Undaunted, the Mighty Stalker continues the hunt. The water is too high now. It would take a miracle for a tail to appear now. 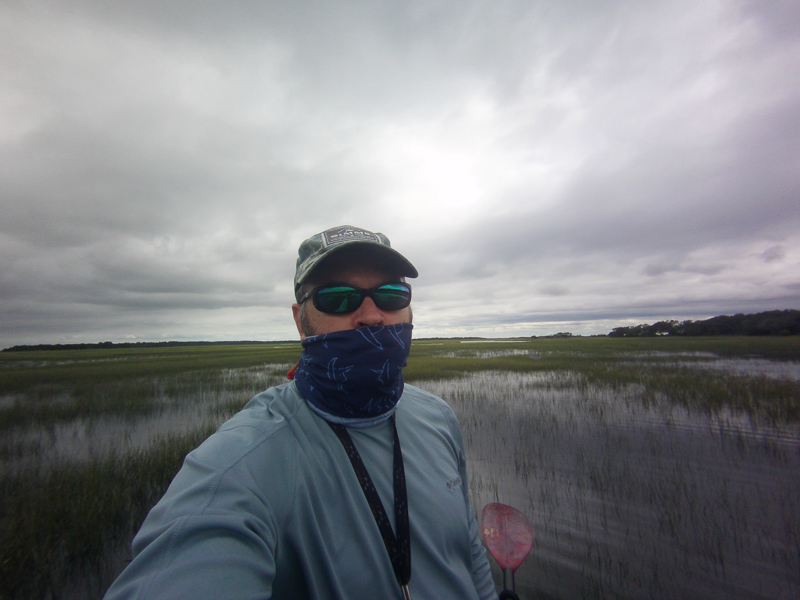 And then it happens. A tail. In all its glory. Barely visible in the murky crud floating against the grass. Then it’s gone. I continue to watch. Movement. I’ve got him! It’s a beautiful specimen. Another swimmer. The skies are darker. I look down to make sure my line is clear. I look up. Not a clue where he is. I cast for the hell of it knowing it’s pointless.

I continue to hunt but the fight is wearing on me. I make one last pass. I paddle towards a fellow kayaker I’ve been watching on another flat since I’ve been out. I throw in the towel and turn around. Then I hear my name. I had my suspicions when I saw the figure and it turns out it’s my friend, Capt. Rich. He had a much more productive day than I, but he’s decided to call it a day as well. The water is just too high. Together we decide to explore another flat but it’s a brief excursion. We’re ready to head back and we turn towards the ramp.

You’ve won again today, reds. But I’ll be back. Your days are numbered.

This entry was posted in reports and tagged redfish, skunked. Bookmark the permalink.