Trout Tremble At My Name

Ok, maybe that’s not 100% accurate. Perhaps it’s due more to chuckling than fear. Either way, it’s a good title and I’m sticking with it.

Over Memorial Day weekend I finally fulfilled a dream. I left the muddy, murky creeks behind and headed north to the crystal clear streams and rivers of Georgia. Jenny’s Creek Campground became the base of operations and was centrally located amidst some fine trout fishing.

Saturday was spent at Unicoi Outfitters. I interrogated one of the employees about the local fishing and left with a nice collection of wet and dry flies. My goal was public water for this trip. In hindsight I should’ve sucked it up and gone private. More importantly I should’ve gone with a guide. I knew better and I still didn’t.

Sunday morning I headed towards Clarkesville, GA. Just south of Brigadoon Lodge and Blackhawk Fly Fishing I pulled off to the public parking at the Jackson Bridge on GA197. The bridge marks a 1-mile stretch of public fishing. 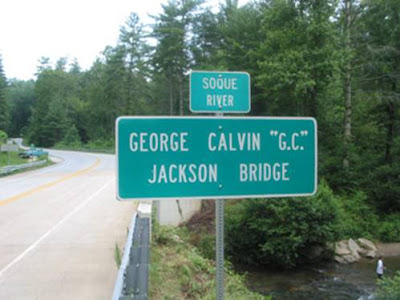 I brought my waders but hadn’t really planned on wading. I guess you could say I’m cheap. I couldn’t see spending money on boots when I’ll get very little use out of them. I’d talked to Unicoi about renting some but they were booked with holiday trips and I needed to get to the store by Fri. Unfortunately with my work schedule that wasn’t possible. Unfortunately aside from the area in the immediate vicinity of the bridge there’s very little open area and wading really is the only option.

I wasn’t about to be so close to my dream without realizing it so I sucked it up and headed into the ice-cold water in my shorts and Crocs. I’m pretty sure there were a few times I stopped feeling my feet and legs. This really was  an eye opener and I quickly realized that I didn’t have a clue as to what I was doing or what I needed to be doing. The differences between freshwater (stream) and saltwater fly fishing are astounding and it’s akin to their being two different activities.

I delicately dropped a rainbow warrior into the water with a short cast upstream. The line was about to reach the bridge and I began to strip the it. The current was moving quickly. The line was sucking to the water and the tip of my Sage rod was bending slightly. At the end of my leader with the fly firmly embedded was my very first rainbow trout! He wasn’t very big (scarcely the size of my hand) but he was a trout…and he was mine! 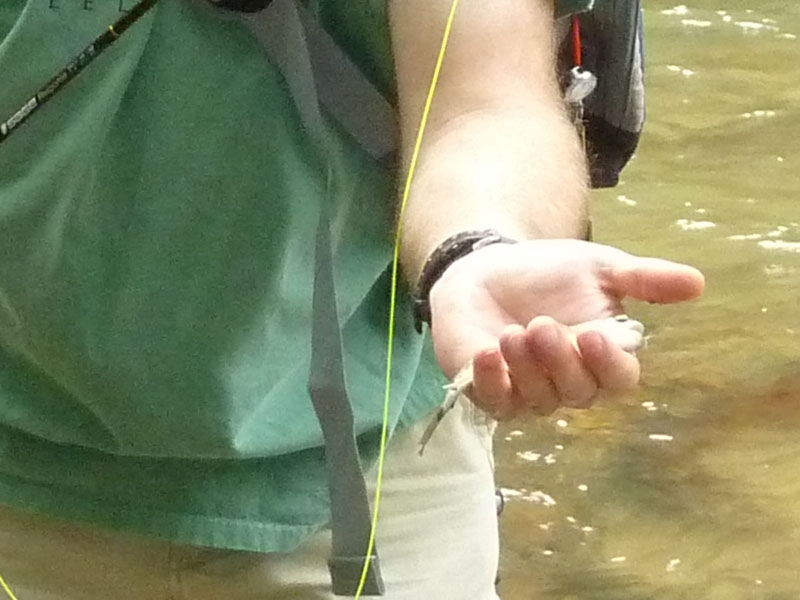 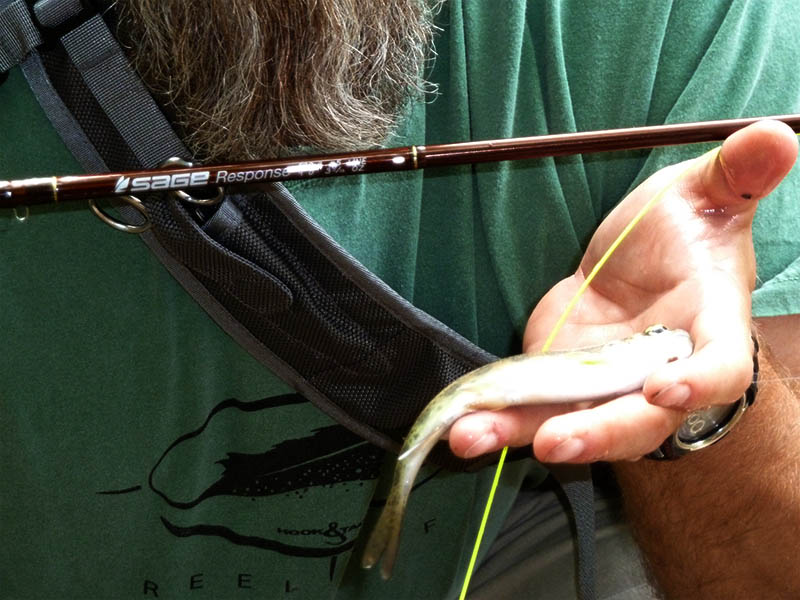 I guess I need a new photographer. I didn’t realize how poor these were going to turn out. 🙁 Oh well.

I made several attempts to work my way upstream to no avail. The brush kept my heart in my throat with the fear of snapping my rod. I ran into a few other anglers (only one other fly angler) and saw none with more than two fish. I made several attempts and tried a few of the flies I’d picked up but nothing worked. I’ll chalk that up more to inexperience than the river or the flies. 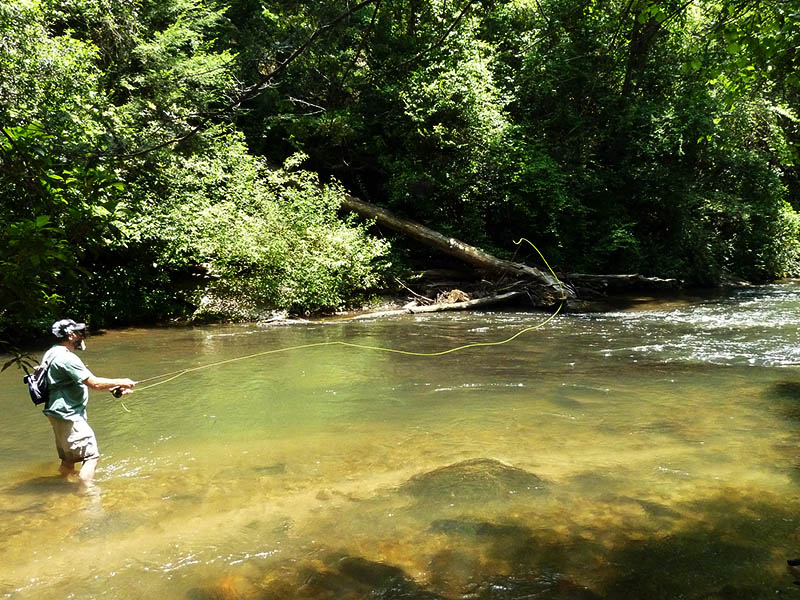 Despite the lack of fish in my net I had a great time. Standing in the middle of a rushing river staring out at the beautiful landscape surrounding me with fly rod in hand opened my eyes to the wonder of trout fishing. For lack of a better way to describe it, I’m hooked. In fact I’m already planning the trip I should’ve planned this time and hope to tackle the true trophies over Labor Day. I have a few months to hone my casting and learn to read the water. Of course I also plan on having a guide to point me in the right direction.

I’m not ready to give up on the redfish and saltwater species but there is a certain allure to trout fishing that I believe will keep calling me back to the mountains.

This entry was posted in reports and tagged georgia, soque, trout, unicoi. Bookmark the permalink.